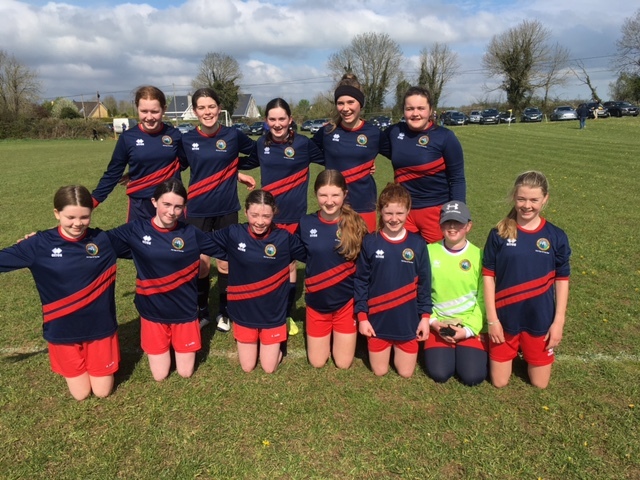 Ballymackey under 13 girls qualified for the semi finals of the u13 cup with a 4-0 win over Knigh today. It was a tight game early on but slowly ballymackey got on top and created a few chances and eventually took the lead when Olivia Looby and niamh Kennedy combined to set Charlotte Deegan through on goal and she finished to the net. the defense of lily Kate Kenneally, Lisa Fitzgerald, Grace kilgannon, Zarah Corcoran and Abigail Armstrong were resolute throughout the game. Into the second half and balkymackey worked hard for a second goal which eventually came when Mioda o shea set up Olivia fitzpatrick to fire home. Isabel manicle worked tirelessly throughout on the right of midfield to keep ballymackey on the front foot. Emma o connell in goals was alert throughout the game to cut out any through balls. The last two goals came in the final ten minutes and were replicas of each other when Olivia Looby ran through the home defense to fire past the goalie on both occasions. Panel Emma o connell, lily Kate Kenneally, Zarah Corcoran, Lisa Fitzgerald, Abigail Armstrong, Isabel manicle, Olivia Fitzpatrick, niamh Kennedy, Mioda o shea, Olivia Looby, Charlotte Deegan and Grace Kilgannon

Our Last one standing Competition starts Saturday and ent...

League win for Ballymackey Women at home to Longfords Sto...

Ballymackey under 14 girls made it two wins out of two to...

Ballymackey women traveled to Birr to take on Killeigh La...

Ballymackey u13 girls started their league campaign with ...

Ballymackey U14 girls started their league campaign with ...