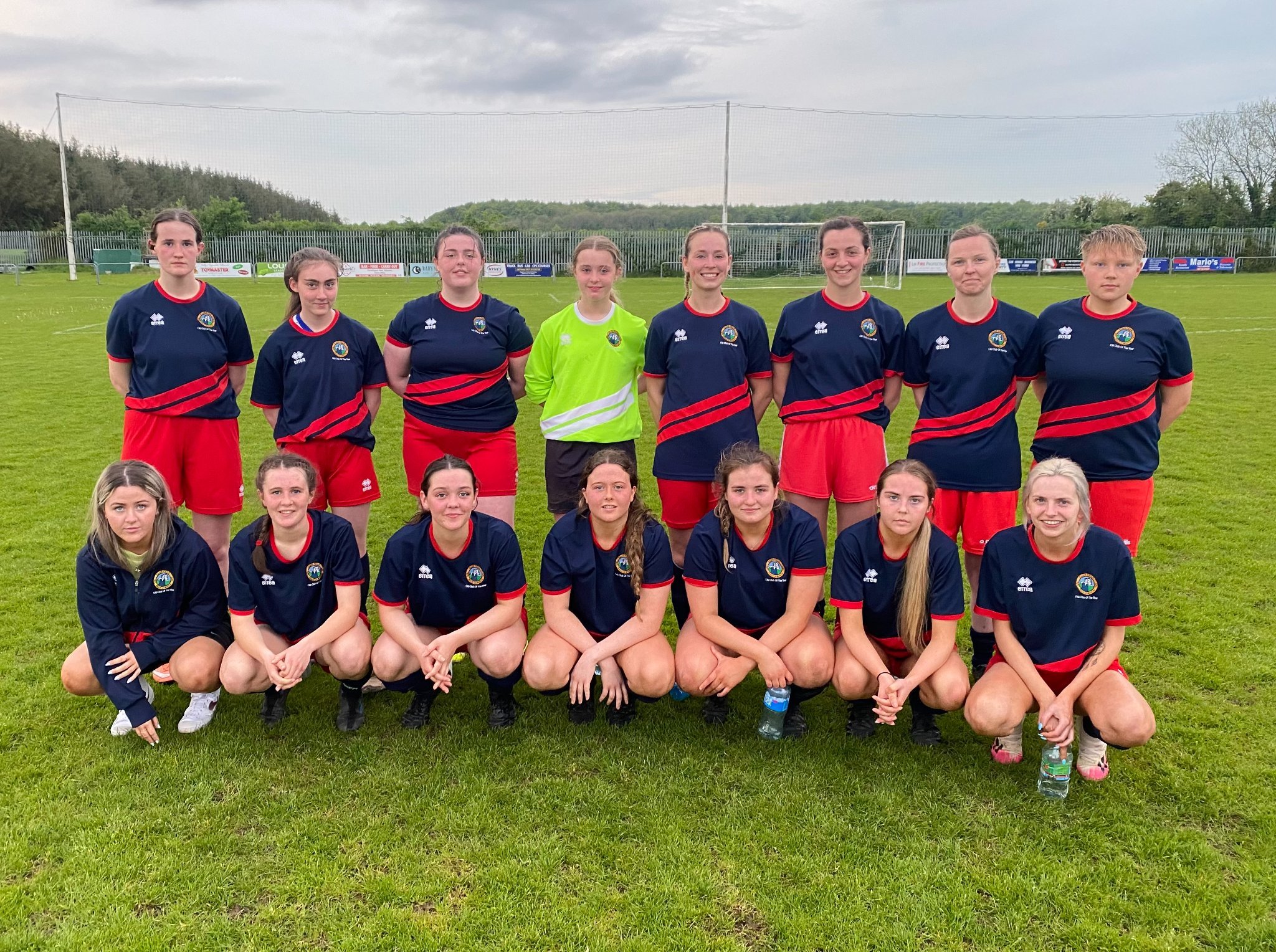 There is a mixture of disappointment and immense pride in Ballymackey following on from a super effort from our Women who just came up short against Willow Park in the Combined Counties Cup Final. Ballymackey took the lead in the 3rd minute with Alanna Morris squeezing in a finish from the tightest of angles. Willow however had an equaliser before 15 minutes had elapsed. Nerves and the occasion were getting the better of Ballymackey at this stage and they lived dangerously and had to rely on scrambling defence against Willow pressure as they struggled to maintain any possession. The nerves settled before the half hour mark and with a slight tactical tweek Ballymackey played themselves into the game and played out the remains of the first half in a confident manner. Ballymackey tore into the second half of the game dominating possession and putting Willow Park under huge pressure, we were agonisingly close to taking the lead on a few occasions. The Willow goalie saved two 1 on 1s and when the ball eventually found the Willow net it was inexplicably ruled offside by the linesman even though it was a Willow player that headed into their own net from a Ballymackey free. We also had a big call for a penalty turned down as Alanna Morris was upended in the box. The girls were emmece playing with confidence, adventure and aggression but the beautiful game can be cruel and with 5 minutes remaining Willow conjured a lead goal. Ballymackey pushed hard for an equaliser squeezing Willow back, a succession of corners free kicks and goalmouth scrambles ensued but Willow just about held firm. In the dying seconds of injury time with Ballymackey going for broke they got caught out on the break, with Willow scoring with no one home in defense with the last kick of the match. No doubt the Girls did themselves, the Club and the women's game justice with an outstanding performance against top opposition. All the girls played out of their skins with excellent performances, Hazel Cawley and Alanna Morris were a huge threat throughout as they ran themselves into the ground upfront, Kate Cavanagh Aoibhín Delaney and Lisa Toohey controlled midfield, centre backs Chloe McAuliffe and Zoey Gratton defended resolutely, wing backs Nicole Ryan, Leah Mcloughney and Clodagh Daly contributed in defense and attack, Goalie Mollie Ryan was a very reassuring presence behind our defense and our player of the match was Niamh O Brien with a barnstorming performance. We were also lucky to have Darra Bourke and Allison McDonnell on the bench with both girls making huge contributions on our journey to the Cup Final. Congratulations to Willow Park worthy double winners and thanks to the Combined Counties League for providing a Cup Final occasion worthy of a great match.

The team will dust itself down very quickly, as we have another Final to look forward to next week. We will play our 32nd and Final match on a long season in the Combined Counties Shield Final and hopefully end the season on a high.

Our Last one standing Competition starts Saturday and ent...

League win for Ballymackey Women at home to Longfords Sto...

Ballymackey under 14 girls made it two wins out of two to...

Ballymackey women traveled to Birr to take on Killeigh La...

Ballymackey u13 girls started their league campaign with ...

Ballymackey U14 girls started their league campaign with ...