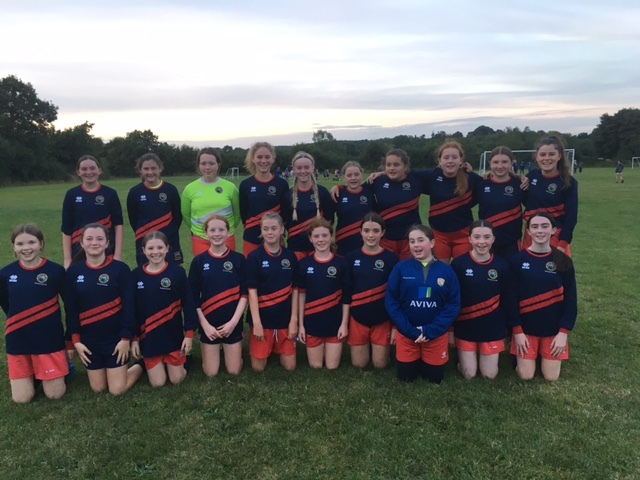 Ballymackey U14 girls started their league campaign with an excellent 4-2 win over a very good Killavilla team. Ballymackey started the brighter and a mazy run by Olivia Looby down the wing ended up with a loose ball in the box which was finished to the net by Mioda O Shea. After that Killavilla got on top and equalized soon after. Ballymackey were under the cosh and conceded a penalty soon after but molly Shelly pulled off a brilliant double save to keep the scores level. Soon after Ballymackey got a foothold in the game helped by the introduction of Lily Kate Kenneally who came close to putting Ballymackey back in front just before half time from another great Olivia Looby run. Into the second half and the Ballymackey midfield of Olivia Fitzpatrick, Mioda O Shea and Lexi Wynne got on top and helped Ballymackey control the game, the trio combined for Mioda to get her second of the game with a fabulous top corner finish, soon after Mioda completed her hat trick when she raced onto a through ball and cooly finished past the goalie. Lexi Wynne then scored on her debut with a fabulous long range strike. Killavilla kept on the front foot and were denied by some good defending by Zarah Corcoran and Lisa Fitzgerald, Killavilla did get a second late on but Ballymackey saw the game through to full time to claim all three points. Panel Molly Shelly, Abigail Armstrong, Niamh Spain, Lisa Fitzgerald, Niamh Kennedy, Zarah Corcoran, Olivia Fitzpatrick, Mioda O Shea, Lexi Wynne, Olivia Looby, Charlotte Deegan, Lily Kate Kenneally, Jane Hall, Aoibhin Delaney, Clodagh Kennedy, Grace Kilgannon, Emma O Connell, Isabel Manicle, Anna Fitzgerald and Aoibhe Hassett.