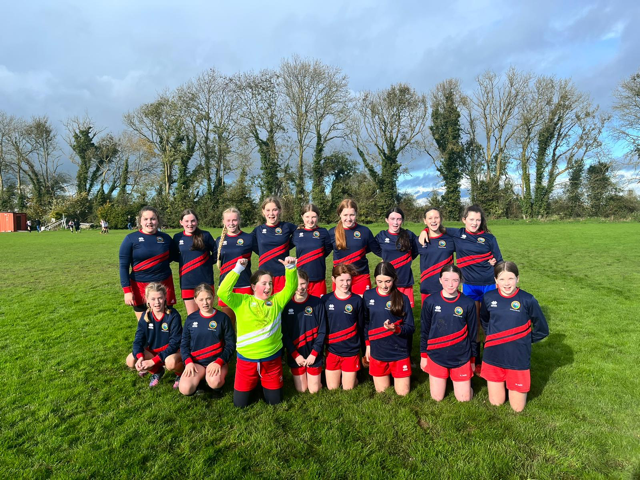 Ballymackey u14 girls made an early bank holiday Sunday morning trip to charleville for our first outing in this years nat cup. Ballymackey came away with an excellent 5-2 win over a very good charleville team. Charleville started on the front foot and took the lead early on. Ballymackey equalised with a fantastic breakaway goal from a charleville corner, Mioda o shea intercepted the corner at the near post and found Olivia Looby who was still in her own half, Olivia dribbled past three players and finished past the goal. Charleville took the lead just before half time but 60 seconds later Lexi Wynne fired home from the edge of the box to leave the half time score 2-2. Into the second half and Ballymackey controlled the game a lot better, the back line of Zarah Corcoran, Lisa Fitzgerald, niamh Spain, niamh Kennedy and Abigail Armstrong defended excellently as a unit and behind them Emma o connell in goals was alert throughout to intercept any through balls. Olivia Fitzpatrick was dominant in centre midfield ably assisted by lily Kate kenneally and Grace Kilgannon. the front four of Olivia Looby, Charlotte Deegan., Lexi Wynne and Mioda o shea played some lovely football and scored 3 second half goals. The first from Olivia Looby who dribbled into the box and finished at the near post, Mioda o shea scored from a Lexi Wynne cross into the box and finally Lexi Wynne lobbed the goalie from a Mioda o shea cross. Many thanks to charleville fc who were excellent hosts and provided us with tea and sandwiches afterwards. Panel:- Emma o connell, Abigail Armstrong, niamh Spain, Lisa Fitzgerald, niamh Kennedy, lily Kate kenneally, Olivia fitzpatrick, Grace kilgannon, Mioda o shea, Zarah Corcoran, Lexi Wynne, Olivia Looby, Charlotte Deegan, Anna Fitzgerald, Isabel manicle, aoibhe hassett, Jane hall and zofia Koloda.